It is with great sadness we announce the death of our beloved father & grandfather. Brian died peacefully at home on his 92nd birthday ^TA

There's been a nice sequence of posts in the last few days (Victor Milán, Steve Wright, Kyra of File 770) listing five sf novels that they feel are neglected. I thought I should join in, and running through my LibraryThing catalogue, these are the least popular novels that I have rated with at least four stars, in alphabetical order by author. I cannot claim that they are all highbrow - one is on the list just because it was fun, and the other because I thought it a good novelisation of a TV story. But I commend them all to you.

Revise the World, by Brenda Clough

This is a novel-length expansion of "Maybe, Some Time" and "Tiptoe, on a Fence Post", Brenda Clough's two short stories about the revival of Captain Oates, of Scott's Antarctic expedition, by researchers in 2045. (The first story was a Hugo and Nebula finalist.) The novel takes Oates through his culture shock at the gender and ethnic emancipation of the twenty-first century, through a passionate love affair and then a daring rescue of his lover from an alien planet. It is actually much better than that makes it sound, with Clough's memorable depiction of Oates as fish-out-of-water the best part of the book, though her alien intelligence is unusual and memorable also.

Time Bangers: One Does Not Simply Walk Into Tudor, by Ivery Kirk and Luna Teague

Look, this is just jolly good fun. Our heroines, historian Beth and scientist Tawny, decide that they have had enough of their boring twenty-first century thirty-something lives and go back in time to the court of King Henry VIII in order to shag him, with frankly hilarious consequences. I found this really funny and enjoyable - my favourite chapter title is Chapter Ten, "In Which Beth Explains The Retrospectively Obvious Hazard Of Substituting TV Dramas For Research", but there also a handy index of erotic scenes at the beginning for those misguided readers who want to skip the bits in between the sex. The authors obviously had a great time writing it, and I was very entertained which is the main point.

The Sarah Jane Adventures: Revenge of the Slitheen, by Rupert Laight

I'm something of a conoisseur of (and indeed apologist for) Doctor Who novelisations. Only a minority of the Sarah Jane Adventures were published in novel format, the first season being best represented; Revenge of the Slitheen was the first story of the first regular SJA series afterr the pilot, introducing Clyde to the established characters (Sarah, Luka, Maria, Mr Smith) and bringing back the memorably farting Slitheen from the parent show.

The book is somehow more confident than the televised version, and the fact that Clyde is a new character and the hook of the new school for all three kids combine with Laight's more confident writing to make it a rather good example of a favourite sub-genre of mine.

The Last Man Aka No Other Man, by Alfred Noyes

I thank Kyra of File 770 for alerting me to this. Almost all of humanity is destroyed by a Doomsday Weapon at the very beginning, the hero spends many chapters exploring dead cities and finding the heroine, and they must then deal with the villain (the hero's surname is Adams; the heroine's first name is Evelyn).

It's pretty heavily steeped in the writer's Catholicism and hostility to war; there is a lot of poetry (including some very coy use of Theocritus in the original Greek when the central relationship is consummated); the twist at the end appears to be a case of direct divine intervention. But it's nicely done. The author is best known for his ballad The Highwayman, first published many years earlier in 1906. 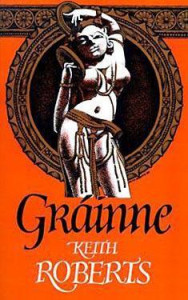 The BSFA Award winner for 1987, but one which has only 22 owners on LibraryThing and only 51 on Goodreads. One of those books that I really enjoyed reading, but can't quite explain why. The whole thing is told as flashback by the narrator, possibly undergoing psychiatric treatment; Gráinne is his former lover, his challenge and his inspiration for moving from a Middle England upbringing to creative heights inspired by Celtic myth; there is some social commentary along the way, but the real point is how the narrator/protagonist achieves his full creative powers through interaction with the entrancing Other.

I've seen a couple of reviewers stating that this is all about the relationship between Ireland and England. It's not really; it's driven by changing English perceptions of Ireland and Celtic heritage (as my excerpt above demonstrates).

If I had excluded Time Bangers, pulp, and media tie-ins, the next two novels on my list would have been The Moon King by Neil Williamson and Marcher by Chris Beckett.
Collapse