'Good sir', he said, 'Tourists are my friends. Permit me to welcome you to Turkey.'

Another birthday present, again from Bob Hall (as part of a private joke), this was a book I had read many years ago; I must have been in the same room as the author on occasion when we were Cambridge students in intersecting circles, but don't recall ever meeting him. Since then I've read three of his other books (two hits and a miss) so it was interesting to return to my first encounter with him twenty-five years ago.

We've both grown up a bit since then. Like all travel writers, the 22-year-old Dalrymple was trying to be Patrick Leigh Fermor (who chose this as his book of the year) - it was a brilliant adventure to recreate Marco Polo's journey from Jerusalem to Kubla Khan's Xanadu, with two different girls for each half of the route (the memorable Laura went on to become a top business executive). I think the mature writer must surely groan now at some of his own arrogance and naivety combined, but it's right to let the original record sit.

The first half of the journey was much more fun than the second, and included places that were much safer thirty years ago than they are now - Syria (to put it mildly), south-eastern Turkey, western Pakistan. On the other hand, I would not be surprised to learn that China is now much easier for the casual foreign traveller than it was in the mid-1980s.

Anyway, I enjoyed my return visit to this book, and it certainly stirs one's own eagerness to travel. (It also reminded me of the Xanadu restaurant of my time in Cambridge, now the Pizza Express on Jesus Lane under the Pitt Club.) 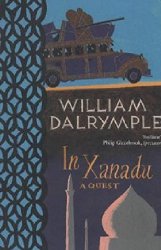