Originally Il galeone dei gatti pirati, translated into English as Attack of the Bandit Cats, this is the eighth (or, in Dutch, third) of a series of many books about the gallant mouse hero Geronimo Stilton, who in this case is forced into exile after an embarrassing accident with phone directories and must evade death at the hands of pirate cats who want to invade Mouse Island and eat the inhabitants. Young F was into these quite a long time ago, and it took me until now to try one; I don't think I need to try another, though we have a few more on the shelves.

The is both the most popular book left on my shelves acquired in 2010, and the shortest. Next in the first category is Thorns by Robert Silverberg; in the second, Moon Stallion by Brian Hayes. 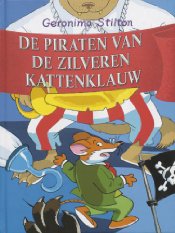