It was near sunset at Castle Caladan on the day of Paul's ordeal. The two women were alone in Jessica's morning room while Paul waited in the adjoining soundproofed Meditation Chamber.

Past the private kitchen he [Baron Harkonnen] stormed —past the library, past the small reception room and into the servants' antechamber where the evening relaxation had already set in.

I last re-read Dune sixteen years ago, when I was starting my previous attempt to run through all the joint Hugo and Nebula winners, in alphabetical order of title. Now I'm trying again, but chronologically, which makes more sense really. Back then, I wrote:

I considered writing a joint review of Dune and the next book on my [alphabetical-by-title] list, Ender's Game. Both are coming-of-age stories of a Messiah figure, who turns out to be the end product of a carefully engineered breeding programme. Both deal heavily with war; both feature apparently incomprehensible and terrifying alien life-forms. Both novels pretty much established their author's reputation, and built a cult of fans who eagerly bought the many sequels (though in both cases the later volumes are generally agreed to be inferior). Both, indeed, are novelisations of stories originally published in Analog. However the two novels are so powerful individually that they deserve separate treatment.

It must have surely been at least partially an sf response to the challenge of J.R.R. Tolkien's The Lord of the Rings (to which Arthur C. Clarke compared it on first publication). Apart from anything else, it is a big fat book (longer, I suspect, than any other two of the Nebula or Hugo nominees for its year put together). The human environment of Dune is rather closely related to that of a medieval fantasy, with a feudal system involving Barons, Dukes, and the Emperor who bestows entire planets as fiefs on his followers. Every ruler has a genetically and mentally enhanced Mentat adviser, who fulfills the role of court wizard à la Merlin; the sect of Bene Gesserit are actually described as witches; the giant worms of Dune guard the immense riches of the planet's spice.

Herbert did not stretch himself linguistically as Tolkien had - the languages of his Fremen and Bene Gesserit are much more closely based on Arabic and Hebrew than Tolkien's Quenya and Sindarin on any real language. On the other hand Dune is the more daring work in its vision of a whole new planetary ecology: the desert, the spice (essential to space travel), the sandworms, and the adaptations made by the people living there to their environment, while Middle Earth is rarely far from pastoral England or chivalric Europe. The only recent sf that I know attempting anything as ambitious as the Dune project are Kim Stanley Robinson's Mars trilogy and the Helliconia trilogy by Brian Aldiss. Wisely, each stopped after the third full novel (with a few spin-offs). [Sixteen years on, and I can't thnk of any subsequent work in the same league as Dune, Mars or Helliconia.]

After 11 September 2001 (I was writing in December 2001), Dune once again makes interesting reading. The tough, fanatical, yet noble Arabic-speaking sons of the desert clash with the corrupt leaders of an imperialist civilisation, who find that they have much underestimated their foe. However direct parallels with the present day soon run into the, er, sand. The hero who leads the Fremen to victory is himself a child of the evil Empire; and the main goal of the Fremen - to make their planet a garden rather than a desert - is not obviously incompatible with Paul Atreides' plans for political power as Emperor, whereas al-Qaeda want to destroy western civilisation, not rule it. And of course in our time line in 2001, at the time of writing anyway, it seems that the sons of the desert were overrated as fighters. (In retrospect I really regret drawing this parallel, which distracted a lot of readers.)

Herbert's portrayal of the difficult encounter between the two cultures is particularly convincing. Most readers will vividly remember the scene early in the book where Stilgar, a Fremen leader, spits on the table before Paul's father, Duke Leto, as a mark of respect, to the consternation of the Duke's men who have not taken in how significant a tribute of water is on this desert world. Equally effective though more subtle (and lengthy) is a passage describing a dinner party hosted by the Atreides family shortly after, in which various local dignitaries give away more than they intend to about the actual political constellation on the planet. The dual role of the Imperial planetologist who is also the Fremen's overall leader, and the careful manoeuvring of the spice smugglers in and out of the two cultural worlds, reflect this encounter and are also a part of the political intrigues which enrich the book - the Byzantine manoeuvring for power between Duke Atreides, Baron Harkonnen and the Emperor; the treachery of Dr Yueh; the ultimately unsuccessful plots of the Bene Gesserit, who as a female class of political advisers in an otherwise male-dominated society, have a better position than most women got in Tolkien.

If the portrayal of culture clash and Machiavellian politics are part of the book's success, its biggest weakness is the handling of Paul Atreides' prophetic mission. The philosophical foundations of his role as Kwisatz Haderach must surely smack rather too much of the Übermensch for today's audience; the rather nasty distinction between "humans" and "animals" made in the first chapter by the Reverend Mother is if anything reinforced by the book's ending. While for most of the book one can feel sympathy for the young man born for leadership trying to get to grips with his fate, once he has got into the stage where his plans are coming to fruition, he stops being interesting; even the villainous Baron Harkonnen expires not with a bang but a whimper.

There are a few niggling details that never quite gelled for me. I never quite grokked the impunity of the Harkonnen attack on the Atreides in the first place; does the kanly blood feud overwhelm all prospect of punishment for mass murder and invasion of someone else's imperial fief? This galactic empire doesn't seem to be all it is cracked up to be, with Dr Yueh's imperial conditioning apparently broken down by simple blackmail, and the imperial troops regularly whopped by the Fremen. On a more ecological point, one has to question whether the sandworms really have enough food to satisfy their enormous energy needs. I suppose that if spice can get spaceships across gaps of light-years it can fuel a planetary population of sandworms. (And the Fremen seem a little too violent among themselves for viability.)

On rereading this time, I stand by most of the above, except where noted. Two new points: Herbert was no feminist, but he did at least give his female characters agency in a way that was rare at the time. And more on the craft side: the fact that each section of each chapter is prefaced with a scholarly quotation both prepares us for the Princess when she appears on stage at the end of the book, but also more importantly persuades us very cunningly that we must be reading an epic, because we are repeatedly told that we are. I've seen a lot of other writers try and fail to do this trick - I don't think Herbert was the first to do it in this particular way, but he pulled it off successfully.

Dune was actually the joint winner of the 1966 Hugo for Best Novel, along with ...And Call Me Conrad aka This Immortal by Roger Zelazny, which remains a firm favourite of mine. The other Hugo finalists were The Squares of the City, by John Brunner; The Moon is a Harsh Mistress, by Robert A. Heinlein; and Skylark DuQuesne, by E.E. "Doc" Smith. The Heinlein is the only other one I've read, and it is of course a classic, but was it perhaps a bit too advanced for the Hugo voters of the day? I must say as a voter I'd have found it a tough choice between Paul, Conrad and Mike.

The other novels on the 1965 Nebula shortlist - which was actually rather a long list - were The Star Fox, by Poul Anderson; Nova Express, by William S. Burroughs; Rogue Dragon, by Avram Davidson; Dr Bloodmoney, by Philip K. Dick; The Three Stigmata of Palmer Eldritch, by Philip K. Dick; The Genocides, by Thomas M. Disch; The Ship That Sailed the Time Stream, by G.C. Edmondson; A Plague of Demons, by Keith Laumer; All Flesh is Grass, by Clifford D. Simak; The Clone, by Thomas T. Thomas and Kate Wilhelm; Open Prison aka The Escape Orbit, by James White. I have read the two Philip K. Dick novels, which are typically but not outstandingly mind-blowing, but none of the others. This was the first ever Nebula Award for Best Novel, and not for the last time, the Hugo ballot was better. (At least The Moon is a Harsh Mistress was shortlisted for the Nebula the following year.) 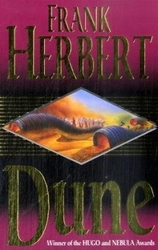