The Tory ‘dementia tax’ could backfire for Theresa May
Ugh.
(tags: ukpolitics )

Get up, you fool, fight the pain and run. The thought spurred him into action, forcing him up from the ground. He had only forty yards to go, so he lowered his head and sprinted for the drawbridge. Mercifully, it was down and he muttered a quick prayer of thanks to Nartis as he flew across. The light from the arrow-slit windows illuminated the rain that prickled the surface of the black moat water. In his desperation Isak had thought only to get into the protective lee of the gate towers; now he slammed into the iron-bound gates and rebounded, scrabbling fruitlessly for a way to get inside.

I seem to have picked this up as a freebie at Eastercon in 2012. It's pretty generic fantasy and I gave up after 100 pages.

This was the most popular book on my unread shelves acquitred in 2012. Next on that list is QI: The Book of the Dead, by John Lloyd and John Mitchinson. 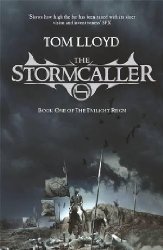