Second paragraph of third entry (Doctor Who - The Edge of Destruction):

Issue 127 of Doctor Who Magazine (August 1987) reported the book was planned for the second half of 1988. It was brought forward when Doctor Who - Attack of the Cybermen was delayed. If it hadn't bee it probably wouldn't have had a hardback edition as W H Allen dropped these from July 1988.

This book's subtitle is A Comprehensive Guide to the Novelisations of Broadcast Doctor Who, and that's precisely what it is. It is only available as an interactive PDF where you can if you like (and I did) read through the entries in chronological order of publication rather than (as they are presented) in order of broadcast of the original story. For each novelisation, the gap in time between broad cast of the TV story and publication of the book is given (starting from -1 day, in the case of The Five Doctors) and the word count for all but the three most recent (shortest: Doctor Who - Planet of Giants, by Terrance Dicks; longest: Doctor Who - The Evil of the Daleks, by John Peel). There's then a listing of UK editions with images of the different covers, the blurb, the chapter titles, individual notes on each book including the fate of the original cover artwork where it is known, and then an account of foreign editions. It's full of odd little bits of trivia - why, for instance, did a Polish publisher decide in 1994 to translate Day of the Daleks, The Three Doctors, Revenge of the Cybermen and nothing else? I was also unaware that there are Australian novelisations of four Eleventh Doctor stories - The Eleventh Hour, Victory of the Daleks, The Time of Angels and The Lodger. Smith loses completist points, however, by including K9 and Company by Terence Dudley (as well as the Pescatons, the two Barry Letts Third Doctor audios and the Sixth Doctor missing stories) but omitting the Sarah Jane Adventures novelisations (which are actually not bad). Still, I mustn't complain; I don't have the time or energy to put this together and I am very glad that someone else does. You can download it for free. 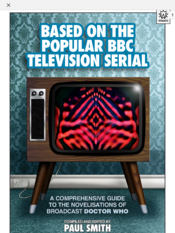