Brexit: Avoiding the vortex
@AndrewDuffEU warns how both sides could screw up.
(tags: ukpolitics eu brexit )

‘Why, I remember doing the very same thing myself!’ her grandfather had often said to the younger, more easily influenced members of his family.

I recorded that I enjoyed Mythago Wood six years ago, but I had largely forgotten it in the meantime, so I wa approaching this rather as if it was a completly new book. I really enjoyed it too, though, a great intense exploration of inner space and myth in English wilderness, with a rite of passage combined with quest for lost relative and connection with mythic figures from the collective unconscious. Anyone who has ever loved a woodland will connect with this. Quite a remarkable book.

This won the BSFA Award for 1988 (presented in 1989); the other nominees were The Player of Games by Iain M. Banks, Mona Lisa Overdrive by William Gibson, Kairos by Gwyneth Jones, The Wooden Spaceships by Bob Shaw and Life During Wartime by Lucius Shepard. I've read the Banks, Gibson and Shepard; I would probably have voted for Banks over this if I were voting, but I'm not sure. The Clarke Award that year went to Unquenchable Fire by Rachel Pollack; the Shaw and Shepherd were on the Clarke list as well. The Best Novel Hugo that year went to Cyteen by C.J. Cherryh, and the Nebula to Falling Free by Lois McMaster Bujold.

I've previously written up the winners of the BSFA and Clarke Awards in 1990 - respectively Pyramids by Terry Pratchett, and The Child Garden by Geoff Ryman. So next in this sequence will be A Woman of the Iron People by Eleanor Arnason, the joint winner in 1991 of the inaugural James Tiptree Jr award. 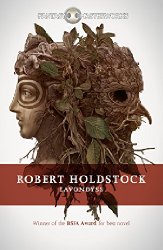