'I see you're enjoying yourself,' said Maan to her in English.

Well, this was heartily recommended to me and you were right. It's a great massive epic of India immediately post-independence, told from the point of view of several upper-middle-class families in the fictional capital of a fictional Indian state, though with plenty of real places (and even real people: Nehru makes an appearance at one point). It's full of politics - religious, factional, class, sexual and electoral (I always like a book with a good election campaign; there are not that many of them). British overlordship in much of India lasted less than a century, from 1858 to 1947, and the picture Seth paints is of a society that has thrown off the more recent rulers and is negotiating its own relationship with older but still resident powers. It's a story told with a warm humour that successfully dials down to grimmer tones for moments of tragedy. A really good book from which I think I learned a lot.

This was both the top non-genre fiction book recommended by you guys, and also the top unread book by a non-white author on my shelves. Next on those lists respectively are Lives of Girls and Women by Alice Munro, and HWJN by Ibraheem Abbas. 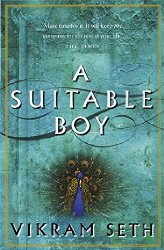