When I agreed to take on the role of Hugo administrator for Worldcon 75 back in late 2015, almost the first decision I made (with my then deputy, Colette Fozard) was about timelines.

I'm one of those who rather like the idea of announcing the Hugo finalists at conventions held over the Easter weekend. But that would have led to a very squeezed timetable for voters, and indeed for us. Working backwards, it seemed best to aim for an announcement in the first week of April, and to close votes two weeks and an extra weekend before that, knowing that it was likely that the 2016 WSFS Business Meeting would give us a larger task than before. That led inevitably to the decision that we'd close voting on St Patrick's Day, 17 March, and aim to make the announcement on 4 April - the first sensible weekday more than two weeks after the close of the vote. (Mondays are almost as bad as weekends for stories like this.)

I was not at all surprised to hear that MidAmeriCon II also decided not to make the announcements at Easter - for the opposite reason, ie that Easter last year was comparatively early, 27 March. The announcement of the final ballot came on my birthday last year, as I was stuck in a noisy pub with a former British MP, trying to discuss serious politics but very distracted by the news coming in from Twitter. I did like the style of graphics for each category (which allow you to tag those finalists with Twitter handles). However I missed the feeling of immediacy that you get with a live announcement.

I toyed with various ideas, such as doing a live webcast announcement (but by whom? And from where?), or organising a sponsored evening event (again, sponsored by whom? And where?). At the same time, at the back of my mind were lurking the images of Helsinki conjured up by Tuula Karjalainen's biography of Tove Jansson, both the city as Tove herself knew it, and her father's sculptures in the city centre for which she modelled.

And I woke up in the middle of the night at the start of February, and I had it - a video tour of Helsinki, with 18 celebrities and fans announcing the 18 Hugo categories for the longest ever Hugo final ballot. If it didn't work, we could always fall back on the tested MidAmeriCon model of timed tweets. But it was surely worth a try. It would be a bit different from the usual way of doing things, and would also be a way to showcase Helsinki for the international audience of Worldcon.

My crazy idea was agreed with surprisingly little fuss. Once we got started, things went really well. Katariina Ihalainen, who is in charge of videography for Worldcon 75 as a whole, accepted the challenge of filming 18 short segments on 1 April and then combining them. Sanna Lopperi took over the inviting and scheduling of individual announcers. Charlotte Laihanen took on logistical wrangling on the day. And before I knew it I was on the plane to Helsinki last Friday, staying overnight with Jukka Halme and Sari Polvinen, and ready for a full day's work on a day of very uncertain weather. And here it is:

The final sequence that you have seen is, of course, very different from the order of filming. It was also a bit different from the original set of ideas. I'd have loved to have had some Finnish politicians, some of whom are sympathetic, but there are municipal elections in Finland this coming weekend and everyone was busy campaigning. If we'd had more time I would have liked to try our luck filming at the old observatory, or the Suomenlinna island fortress, but we were constrained by the calendar and the hours of daylight. We had intended to do shots of the Uspenski Cathedral, Senate Square and the harbour, but the weather was against us. On the other hand, one venue turned us away - luckily by then the weather had improved and we retreated to the Tove Jansson statue in Kaisaniemi Park. 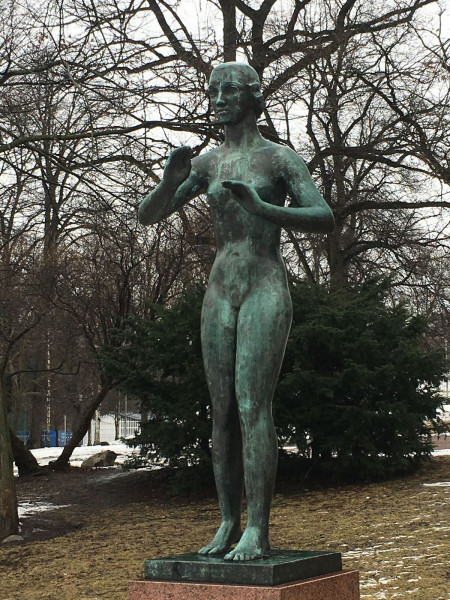 We had actually started next door to there, at 9 am in the main railway station with Johanna Vainikainen, aware of the chilly wind blowing in from the outside. By the time we got to the Finlandia Hall and National Museum, it was actually snowing a little. At the Sibelius monument, I took a selfie with my favourite composer as the snow turned to sleet. Johanna Sinisalo stood in the well of a dormant fountain with a Tove Jansson mermaid, reading the Best Novel finalists with rain dripping off her umbrella. The last shot of all, which was actually the first shown (Hanna Hakarainen and the Campbell Award finalists), was filmed at 5.30 in the very foggy Malmi cemetery, eight and a half hours after we started. But we were still more or less on schedule, and (perhaps more amazingly) we were all still on speaking terms with each other. 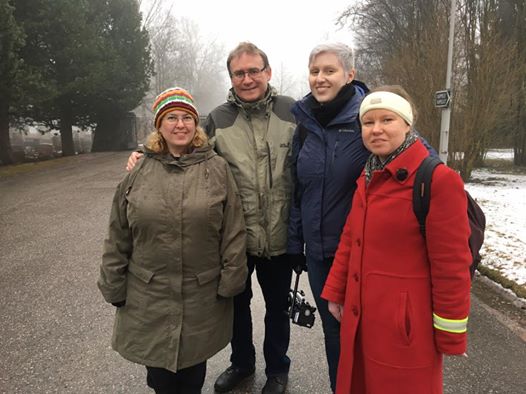 We were happy but also glad it was over. (Though Katariina then had the task of editing it all together, and did a fantastic job.)

I don't think this need be seen as some sort of challenge to future Worldcons to replicate (or exceed) what we did. Easter is at a more normal time next year (1 April) and Worldcon 76 is a little later in August, so a return to the Easter weekend announcement is perfectly feasible. But I think it was good to do something a little different, and I hope you enjoyed watching it.
Collapse