To describe the Captain would be to spoil the surprise. It's probably safest to describe his chair, which was very large and dominated the Bridge of the Citadel. From here, the Captain could look out through the vast domed windows, down the mountain, across the city of Zxoxaxax and over the plains of Malchios. The cities were easier to see than they were to spell.

I was in London at the start of the month, and who should I find in Forbidden Planet but James Goss, autographing copies of the very newest Doctor Who book! 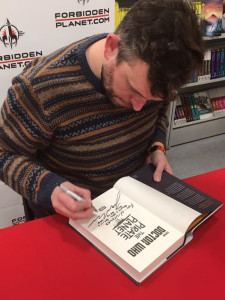 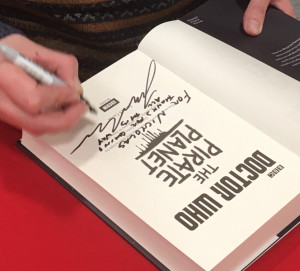 As my regular reader knows, I rate James Goss as possibly the best regular writer of prose for Who at present. Here he follows on from the success of his novelisation of City of Death to tackle the missing book from the Key to Time series. And it's great, turning a somewhat problematic and wobbly screen story into a rather well developed narrative, filling background, foreground, and much else. The Doctor/Romana banter remains, cranked up a bit if anything; even K9 gets some good moments, plaintively calling "¿ɹǝʇsɐW" after lading upside down at one point. The Captain, the Queen and Mr Fibuli, who are all of course cartooney characters, none the less get a bit more depth and dimensionality in this treatment, and the Mentiads, renamed Mourners, make a lot more sense on the page than on the screen.

For a bonus we get the original story treatment by Adams, where the nature of the planet and the character of Romana had not yet fully evolved, and his thoughts on the Key to Time (which end with the hand-written word "Mice") - a lot more insight into story development usual. And there are some interesting hints about the true identity of the so-called White Guardian.

The first Doctor Who book published this year - a good start.