I went this morning with my older godson D (as opposed to my younger godson E), his other half S and their new baby L (the youngest of our grandfather's 24 great-grandchildren) to the Adventures in Moominland experience at the Southbank Centre. S is actually Finnish, so was particularly good company for this outing. You can't take pictures inside, but you can take them outside. 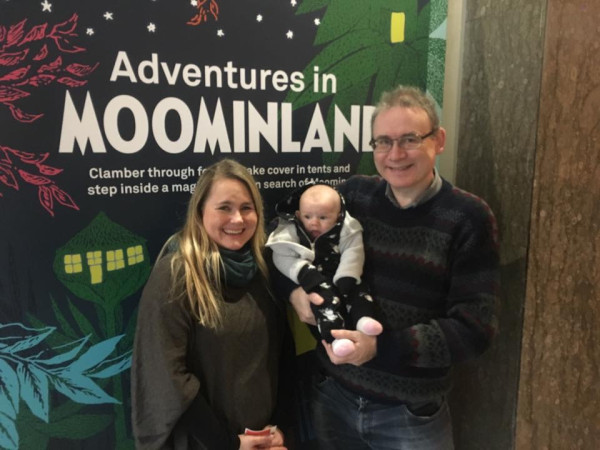 You have to book in advance for a specific slot for the 50-minute visit; we had unfortunately booked different slots, but they were commendably flexible and found enough space for us all to do it together.

I won't say too much about the experience itself to avoid spoilers, but it is particularly aimed at grownups who want to revisit the Moomins, though I think children over seven will not be bored. One three-year-old in the group before us had had enough after ten minutes and was extracted early. Little L (almost four months old, and wearing her Moomin sleepsuit for the occasion) enjoyed the different sensory stimulations, entertaining everyone by giggling madly at one point, and dropped off into a satisfied sleep at the end. (Some people will need to be aware that there are flashing lights and scary bits.) Each visit is led by a docent, supplemented with cheery voiceovers by Sandy Toksvig. (The docent kept looking at me when the subject of Hemulens came up. I don't know why.)

I will give away one spoiler (well, two): particular attention is given to how Tove Jansson's relationship with the first woman she loved is played out in the story of Thingumy and Bob in Finn Family Moomintroll, and to how the love of her life, Tuulikki Pietilä, inspired Too-Ticky in Moominland Midwinter. (Our docent asked S to correct his pronunciation of "Tuulikki Pietilä", which he knew was wrong.) It's impossible to tell Tove Jansson's story without including her love life, and full marks to the organisers for embracing the opportunity.

Upstairs there is a small free exhibition of some of the Moomin comic strips, both as drawn and as published, which are suitably surreal. 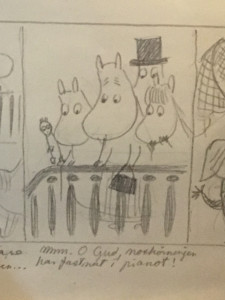 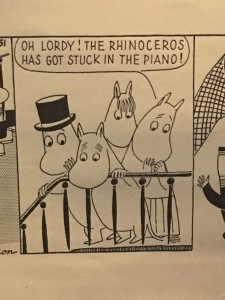 I bought a couple of mugs as well as one of the comic strip collections.

And my godson D made a new best friend. 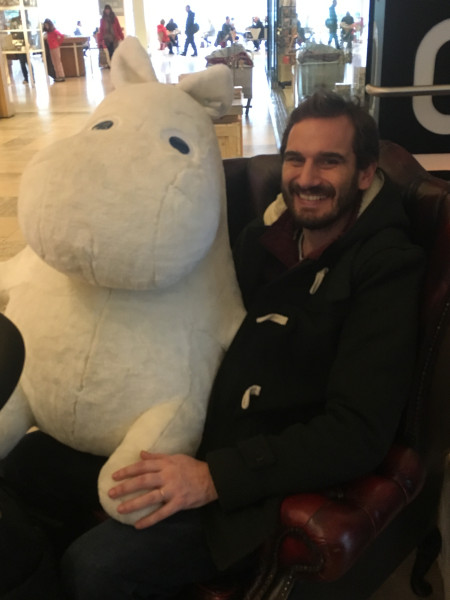