The Brexit debate – flailing around in a pool of shit
@JonWorth's pungent week on Twitter.
(tags: eu brexit ukpolitics twitter )
What It's Like Teaching '1984' After Trump's Election
Chilling.
(tags: Uspolitics )
The Best Star Trek Episodes From Every Series
A useful if contested list.
(tags: sf )
The Real Risk Behind Trump’s Taiwan Call
He doesn't know what he doesn't know.
(tags: China uspolitics ) 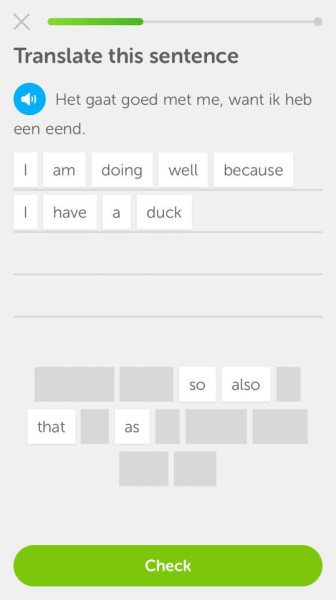 Over the last month or so, I've become steadily more addicted to Duolingo, a language-learning app for smartphones. It's a nice little routine: on the bus or the train on the way to work in the morning,or lazing in bed at the weekends, I just fire it up and do a couple of minutes of language practice. There is a progression of 60-70 modules of 2-8 exercises each - I'm a third of the way through courses of the two languages I have chosen, 50 days in, doing two or sometimes three exercises a day.

And on the one hand, I know perfectly well that it's no substitute for conversing with real speakers of the real language. On the other hand, it comes in nice doable bursts, and frequent repetition is very important too.

As an experiment, I've been doing Duolingo with Dutch, which is probably the language I am most comfortable in other than English (I am fairly fluent in German and French as well); and Irish, which I've tried in the past and found very difficult to retain. For Dutch, I've found it very helpful in freshening me up on the gender of nouns, what happens to adjectives, and some of the odder prepositional phrases. For Irish, I'm not so sure; no structure is provided, just the translation exercises, so I'm still a bit wobbly on the circumstances of eclipsis and lenition - though at the same time it's interesting to be presented with a set of examples and try to work back; why does cuisneoir become chuisneoir here, for instance? 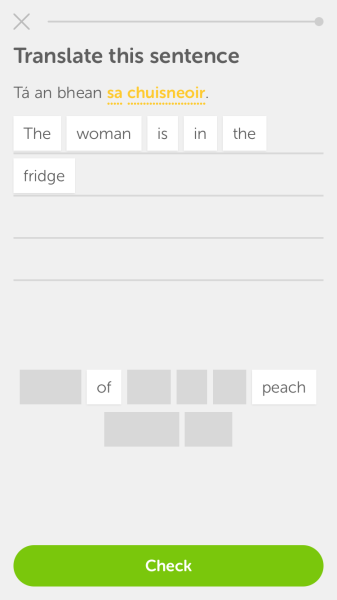 Anyway, all this to say that if you have regular gaps in your day of the 5-10 minute range, this is not a bad way of filling them. Other languages available include Spanish, French, German, Italian, Portuguese, Russian, Swedish, Turkish, Danish, Norwegian (Bokmål), Polish, Hebrew, Welsh, and a few more that are in development. I have tourist level Spanish, Italian, Portuguese, and Russian, and I can see myself brushing them up and trying to crack some of the others, once I have finished the current two courses.
Collapse