I came across an interesting map the other day, showing the local government electoral divisions of north-eastern Ireland in the mid-20th century, showing dispensary districts (never heard of them before!) and electoral divisions (presumably these are the wards used for local council elections after the abolition of proportional representation in 1932):

My eye was caught by an anomaly around Belfast: Down at the southern edge of the city, the Dunmurry dispensary district west of the Lagan includes the Malone, Derryaghy and Lissue electoral wards of Lisburn Rural Council, and the Ballylesson dispensary district east of the Lagan includes the Breda and Drumbo wards of Hillsborough Rural Council - and also a small corner marked "part of Malone", nestling in an angle of the southern perimeter of the Belfast municipal boundaries.

I found this fascinating. In general Irish political geography has avoided institutionalising small enclaves (as opposed to much bigger ones); this seems on the face of it to be a tiny sliver of Lisburn Rural Council, in County Antrim, detached from the rest and sandwiched between the County Borough of Belfast and County Down.

The location of this enclave appears to be roughly at 54.559 N, 5.932 W, the location of Moreland's Meadow, an 18 acre/7 hectare extension of the Lagan Meadows separated from them by the two straight lines of the old canal on the west, with Belvoir Forest across the river to the east (and the Newtownbreda sewage works visible to the northeast): 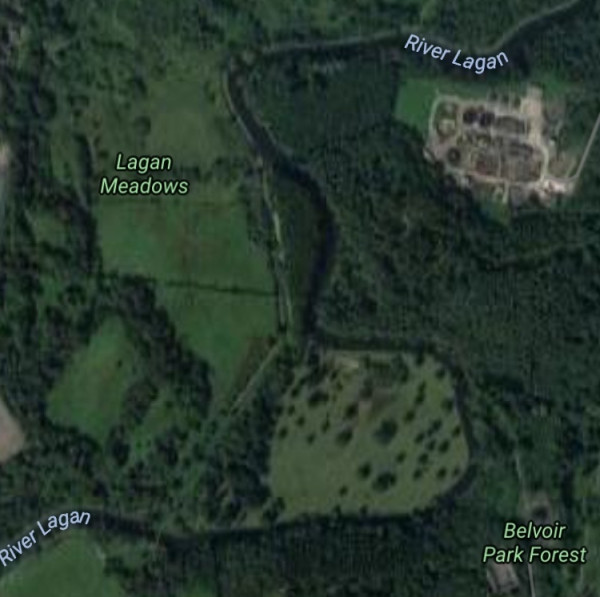 (Incidentally I always referred to it as Belvoir Forest Park, pronounced "Beaver", but it seems the official name is Belvoir Park Forest.)

A plausible explanation might be that the old municipal boundary of Belfast followed the canal line, and the old county boundary between Antrim and Down followed the river, leaving Moreland's Meadow stuck between.

This was surprisingly difficult to verify with online sources. The Ordnance Survey used to have a very nifty historical maps website, but it seems to be offline. Then I found a Google Books copy of Belfast: Approach to Crisis: A Study of Belfast Politics 1613–1970, published in 1973, a bit behind the curve, by Ian Budge and the late great Cornelius O'Leary (my father is referenced in a footnote on page 65). This has a map on page xxii showing the 1853 and 1896 boundaries, conveniently set off by shading to indicate the ambition of Belfast Corporation to annex neighbouring territory in 1947. Moreland's Meadow is roughly under the "E" in "RIVER LAGAN". 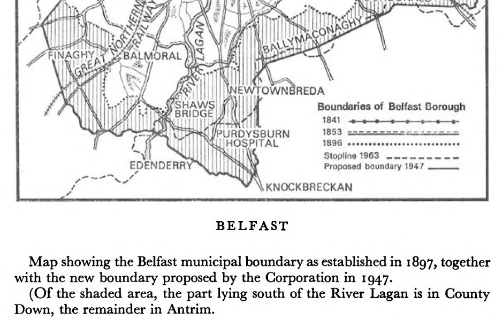 It's clear enough that the sharper angle of the canal, rather than the kink in the river, is that followed by the Belfast boundary. But it is if anything implied that the Antrim/Down boundary followed that of the city vs the countryside.

However. At last I located what appears to be a 1915 map of Belfast at the Charles Close collection, and this makes it clear that my initial suspicions were correct. 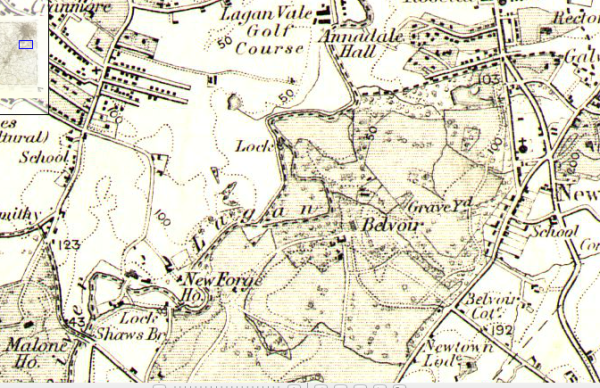 I do not know whether Moreland's Meadow was included in Belfast, Antrim or Down for the purposes of the electoral register. In practice, it is unlikely to have mattered - I suspect it has never had a permanently resident human population. In 1973 (possibly earlier, but I think not until then) it was incorporated into the new Belfast District Council, and the boundary between Belfast and Castlereagh Districts ran along the river (not the canal) until the local government reform of a couple of years ago, when Belfast expanded to the ring road east of the river and the entire area became part of the city.

It's been interesting to research this in the week that Belgium and the Netherlands swapped parcels of land and adjusted their border peacefully. That resolved a boundary that lasted from 1843 to 2016; the Moreland's Meadows enclave was considerably smaller, and lasted at most for 75 years.

Moreland's Meadow is grazed by cattle and features venerable oak and cedar trees. It sounds very pleasant. I must look in next time I am passing.
Collapse