NASA Didn't Find Life on Mars—But It Did Find Something Very Cool
West Wing not prophetic yet in this case.
(tags: mars astronomy )

This is the eleventh in the series of Les Mondes d'Aldébaran, the lush sf graphic novels by Brazilian-French writer/artist Leo (Luiz Eduardo de Oliveira), and the start of Antarès, the third of the four sequences within the cycle. Good news, Leo fans: three films are being made based on the five books of the first cycle, Aldébaran, directed by Emanuel Buriez, but no details of who will take the starring roles as yet. The films are due to come out in 2017, 2018 and 2019; I may try and make a rare cinema excursion to see them.

This first album in the new sequence has two strands, the problems of a reconnaissance team on the planet known as Antares (not of course in orbit around Antares, just a star in roughly the same direction as seen from Earth), and the efforts of the Forward Enterprises corporation of New York to persuade Kim, the heroine of the first two series, to lead an expedition to find out what is going on. Kim has her own problems, having been impregnated by an alien being in the middle of the previous book and producing a little girl with fins and gills. By the end of this volume she has reluctantly agreed to return to space with her old comrades and her child, and we are braced for the next volume.

Double value from my usual excerpts policy today. Here is the second frame from page 3: 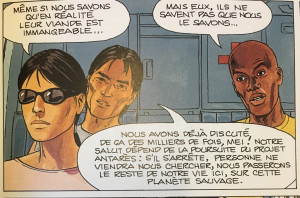 Mei: "Even though we know that really their meat is inedible..."
Salif: "But they don't know that we know that..."
Zao: "We've talked about this thousands of times, Mei! Our safety depends on the Antares project continuing: if it is ended, nobody will come to look for us, we'll spend the rest of our lives here, on this wild planet."

And the second frame from the third section of the story: 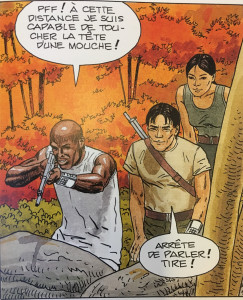 Both of these are from the plotline dealing with the frustrated and endangered advance party on planet, siblings Mei and Zao, and Salif whose favourite T-shirt says "je viens de Mali". He's come a long way. 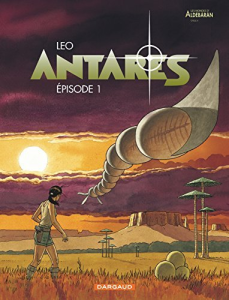