Trump Grasped What Others Missed
Short but clear.
(tags: uspolitics ) 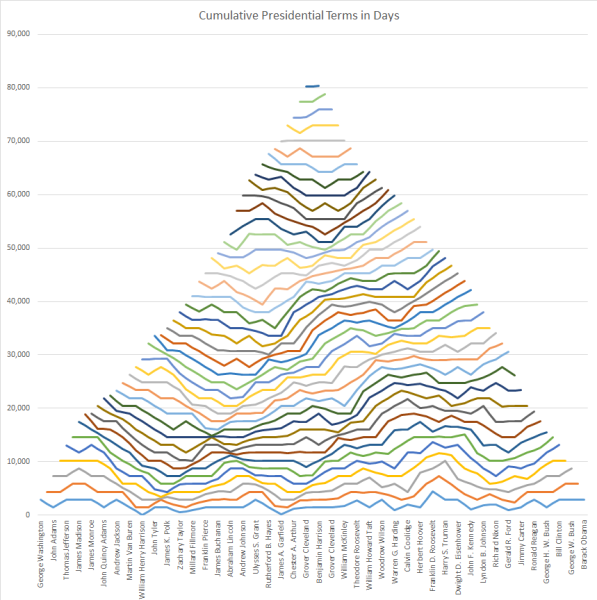 "Yes, Nicholas, but what does it mean?"

Let me tell you what it means.

Along the bottom you will see the names, in order, of the US Presidents to date.

Immediately above them is a blue line, which corresponds to the length of each president's term in days. (Counting Cleveland's two terms separately, and assuming Obama serves until 20 January 2017.)

Above the blue line is an orange line, showing the cumulative terms of pairs of presidents who served successively. So the leftmost point corresponds to the almost 12 years, 4,325 days, served by Washington and Adams; the next point is at almost the same level, corresponding to the twelve years exactly, 4,382 days, served by Adams and Jefferson. (Usually there are 4,383 days in twelve years, but 1800 was not a leap year.) And so it continues, dipping to four years for Harrison/Tyler, Taylor/Fillmore and Garfield/Arthur, rising to twenty years for FDR/Truman, and ending with a stable sixteen years for Clinton/Bush and Bush/Obama.

The third line, which is grey, combines each group of three successive presidential terms - from almost 20 years for Washington/Adams/Jefferson to 24 years for Clinton/Bush/Obama, peaking at twenty-eight for FDR/Truman/Eisenhower, dipping to eight three times.

And so on up to the top.

The two presidencies of less than a year - the elder Harrison and Garfield - have the most noticeable effect on the graph, sharp jumps rippling up through the centuries. There are similar but shallower gradients associated with the other short presidencies - Taylor/Fillmore, Harding, Ford, Kennedy.

But if you look closer, you can also see the impact of timing. Both Harrison and Garfield died less than a year into office; both succeeded one-term presidents (Van Buren and Hayes); both of them succeeded eight-year presidents (Jackson and Grant, who had other things in common). So in both cases the gradient shows a sharp decline/increase as those factors hit. By contrast, although Taylor and Fillmore both served less than four years, they were in the middle of a period of one-term presidents and therefore stand out less.

The shallower ripple from FDR's 12 years is also visible - boosted by the fact that his immediate successors also served relatively lengthy terms, but both before (Hoover/Coolidge/Harding) and after (Kennedy/Johnson/Nixon/Ford/Carter) there were periods of shorter service.

I'm sure this can be made more beautiful with someone who has better graphic skills than I do. If you decide to have a go, try this one as well: 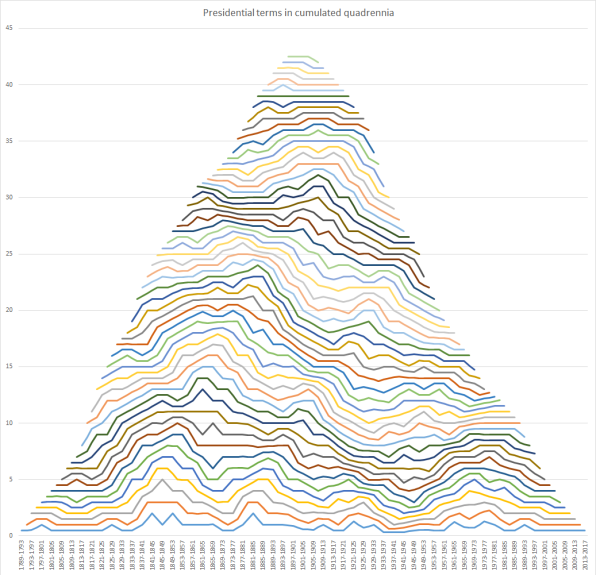 You can see the ripple effect of the lengthy presidencies from 1933 to 1961 going right up through the graph. The longer presidential terms both at the start and the end of the overall peiod from 1789 to 2017 also slim down the contours at the edges. Of the shorter presidencies, the Garfield/Arthur period of 1881-1885 stands out a bit more than the earlier ones, partly just because it is closer to the middle I suppose.

Again, I suspect that someone can present this more beautifully than I have done. If you do, please give me credit!
Collapse