Nate Silver is my secret boyfriend. (Did I say that out loud?)

Every Friday, Nate Silver's brilliant FiveThirtyEight site, which mainly deals with electoral and sports statistics and probabilities, poses a mathematical puzzle for readers. Usually I must admit they stump me completely, but this week his colleague Oliver Roeder has posed two lovely gerrymandering questions.

The first is easy. Can you draw five equally sized, contiguous, non-overlapping electoral districts in this grid so that the Blue party, with nine voters, wins more seats than the Red party, with sixteen? 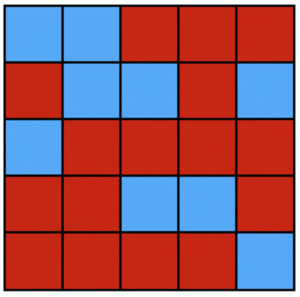 If Blue has a bit more than 25% of the votes, there is usually a solution available that can give Blue more than 50% of the seats. In this case Blue has 36% of the votes. One we create two homogenously Red districts, Blue has 60% of the remaining voters and it's just a matter of finding lines that work. My solution is below, but it may not be unique. 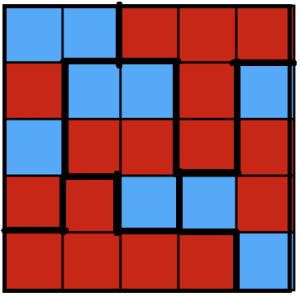 But that's only the hors d'œuvre. The main course is this map, loosely based on the real geography of Colorado: 140 squares, 51 Blue and 89 Red. 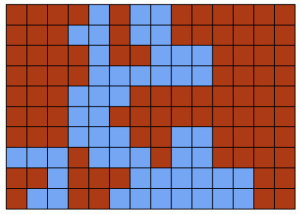 You must draw 7 districts of 20 squares each. The two questions are: What is the most districts that the Red Party could win? What about the Blue Party? You are allowed to call ties within a district as wins for the party of your choice, which makes things much easier.

Gerrymandering for Blue is straightforward. Once you lock up two homogenous Red districts, you have 51 Blue votes and 49 Red, and you just need to draw boundaries for the remaining five seats that in four cases are a 10/10 split and in the fifth 11/9, giving Blue five seats out of seven (56%) on 36% of the vote. 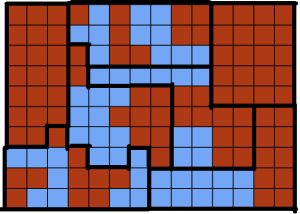 Drawing the boundaries to suit Red is a little trickier, but only a little. With Blue controlling only 36% of the voters, it is not too difficult to build seven seats that reflect that and give Red a clean sweep of all seven. In fact, when I started by creating seats with 11 Red voters and 9 Blue, I found I ran out of Blues towards the end. As you can tell, I constructed this map from the bottom up (or rather from South to North): 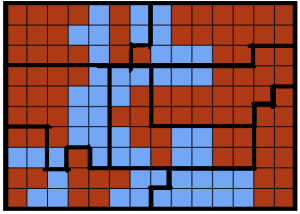 (To balance my previous comment, going back again to the US Congressional elections of 2012, the Democrats won all nine seats in Massachusetts with 66% of the vote.)

Readers will probably be aware that I prefer proportional representation. If you have a multi-party system, as most mature democracies do, single-seat elections will mean that many political options end up just not being represented. Single-seat elections also raise the bar for getting under-represented groups their fair share of representation, no matter how fair the system for redrawing boundaries may be.