Three Brexiteer wheeze unravels. Is May up to it?
Good question.
(tags: brexit ukpolitics )
What would a Trump presidency mean for the rest of the world?
Brendan Simms forecasts "unmitigated catastrophe".
(tags: Uspolitics )
From the publisher: A response to threats about our presidential endorsement
The Arizona Republic's answer.
(tags: uspolitics )
Irish leaders fear Brexit will bring economic disaster
First in a series.
(tags: ireland ukpolitics northernireland eu brexit )

Yesterday I became a godfather for the second time. My cousin L had a baby boy, E, in June. He was christened in the same robe worn by Sean Murray, grandfather to both me and L, when he was baptised over a century ago, in an Ireland still under British rule. (Many later additions to his family subsequently wore the robes for their baptisms, including me.) Our grandfather lived to become the second most important civil servant in the Irish state and died suddenly in October 1976, leaving nine children by two marriages. My grandmother had died in 1946, shortly after the youngest of her four children was born. My grandfather's second wife bore him five more children and survived him by two decades, until Christmas Day 1998. (They all three rest together now in Deansgrange cemetery.) My mother is the oldest of the nine (two of whom we have sadly lost in recent years); I am the oldest of the 22 grandchildren. (For completeness: my father had only one sister, who had no children. My paternal grandfather, however, was one of fifteen, and that's where it gets really complicated.)

My daughter B, who turned 19 in June, is the oldest of Sean Murray's 24 (so far) great-grandchildren, though not by much; L's niece K, born a few months later, is now 18 and (like my son F) in her last year in school and pondering university options. I was thrilled to be asked to be little E's godfather, and also delighted that his first cousin K is his godmother. It seemed nicely symmetrical that the oldest of the grandchildren, and the oldest great-grandchild who is able to do so, should take lead roles together in a rite of passage for one of the newest additions to the family. 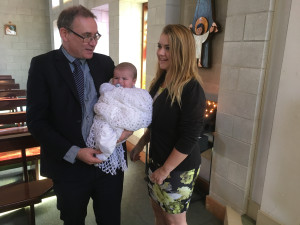 I say one of the newest, because in fact three of my other first cousins have had babies this year, two of them since little E was born. The most recent baby of the lot is my first godson's fourth child. (I was a 14-year-old godfather; now I am 49. My first godson's godmother is one of our mutual aunts.) I don't know (and it's none of my business) if he or the others have decided to have their children baptised, and if so, if they have decided to have relatives as godparents. We ourselves broke with family tradition and asked friends of own generation to do the honours for our three. At the same time, I can see a strength to using the baptismal godparent/godchild relationship to slightly subvert and cut across the ordinary family ties of age and affinity.

I no longer count myself as a practicing Catholic, but I'm relaxed about participating in events like this. It is probably a tradition as old as humanity to have a welcoming ceremony for a new addition to the wider family, including the designation of special sponsors for the child in its later life; and whatever its other faults, the church in Ireland is at least still capable of implementing these rituals competently. In most of the country, it would be quite time-consuming to find or create an alternative, and it's entirely legitimate to go with the local institution that has been providing baptismal rites in Ireland since 432 AD. And I'm very glad to have been standing there with little E, with his first cousin K, with his mother L, with his father (another E), and to just say in public that we would be looking out for him. 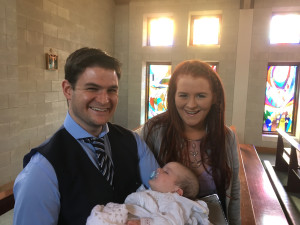