Thus a shrill voice, to his ears hideously different from that other, interrupted and dispersed his visions. Little Jane, his ten-year-old sister, stood upon the front porch, the door open behind her, and in her hand she held a large slab of bread-and-butter covered with apple sauce and powdered sugar. Evidence that she had sampled this compound was upon her cheeks, and to her brother she was a repulsive sight.

Seventeen: A Tale Of Youth And Summer Time And The Baxter Family Especially William was the best-selling novel in America a hundred years ago, in 1916. If its author is remembered at all today, it is for The Magnificent Ambersons which came out in 1918, won the Pulitzer Prize and was adapted to become an Orson Welles film in 1942. Seventeen was also filmed, in 1940, starring Jackie Cooper and Betty Field though not in their best known roles. (I note that one of the minor parts is played by a "Hal Clement"; presumably not the sf author, who would have been a Harvard undergraduate in 1940.)

I was rather turned off by the book at first because William is pretty callow even for a seventeen-year-old in literature, and Lola, whose entire conversation consists of baby talk with her dog, is even worse. There's also some good ol' racism in the treatment of the local black odd-job man, Genesis. But actually once I got into it, I started to appreciate some of the characters a bit more - William's mother, who tries to mediate between her son's actuakl and perceived needs, and especially Lola's host, Mr Parcher, who is at the sharp end of observing her infantile behaviour and her court of admirers. There's a lovely moment for him at the end of Chapter 27, as the farewell party for Lola reaches its end:

At half past one the orchestra played “Home, Sweet Home.” As the last bars sounded, a group of earnest young men who had surrounded the lovely guest of honor, talking vehemently, broke into loud shouts, embraced one another and capered variously over the lawn. Mr. Parcher beheld from a distance these manifestations, and then, with an astonishment even more profound, took note of the tragic William, who was running toward him, radiant—Miss Boke hovering futilely in the far background.
“What’s all the hullabaloo?” Mr. Parcher inquired.
“Miss Pratt!” gasped William. “Miss Pratt!”
“Well, what about her?”
And upon receiving William’s reply, Mr. Parcher might well have discerned behind it the invisible hand of an ironic but recompensing Providence making things even—taking from the one to give to the other.
“She’s going to stay!” shouted the happy William. “She’s promised to stay another week!”
And then, mingling with the sounds of rejoicing, there ascended to heaven the stricken cry of an elderly man plunging blindly into the house in search of his wife.

And even the treatment of Genesis improves, especially as William's annoying (but much more sensible) little sister Jane becomes an ally in subverting her brother's plans.

At the same time, it's curiously innocent in some ways. William's parents' worst fear is that he might take it into his head to elope with Lola and marry her, a possibility of which he is only vaguely aware and in which she appears utterly uninterested. The prospect of pregnancy (let alone contraception) is simply not mentioned, except when Genesis reminisces to the uncomprehending Jane and William about his early life. (Later in 1916, Joyce published a book in which his teenage protagonist has sex.) Although William and his rivals are supposedly in their later teens, they are somewhat infantilised - and Lola even more so. And the author's humour at the expense of Youth tends uncomfortably towards sneering rather than gentle.

Anyway, I've read this, so you don't have to. It is mercifully short.

Front cover is very dull so this is the poster of the 1940 film. 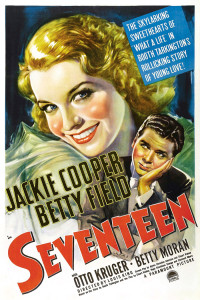