Rembrandt: "Vessels of the stars. Not my usual line of work, but she was willing to pay and I was unwilling to starve."

I listened to this for the first time back in March, on a day when other matters broke my concentration, so returned to it with the intention of taking careful notes. But you know, I was just enjoying it too much. It's a Fifth Doctor adventure, set immediately after Arc of Infinity (which ends with the Doctor, Tegan and Nyssa still in Amsterdam); the two plot lines concern the team's discovery of a Rijksmuseum display of some eerily accurate spaceship blueprints drawn by none other than Rembrandt van Rijn, and Tegan's ex-boyfriend (from the months between Time Flight and Arc of Infinity - what, you thought she sat around in Heathrow?) who turns up and attempts to win her heart back. Of course the Doctor goes back to Rembrandt's time to investigate; of course the two plot-lines turn out to be inextricably entangled.

The alien behind it all is played by Elizabeth Morton, who you can see in the middle of this picture between her husband and a starstruck fan (picture taken by John O'Halloran at the pre-Hugo reception in 2014, where said husband was up as director and writer of one of the Best Dramatic Presentation Short Form finalists; shortly after this picture was taken, her phone rang, and it was their son-in-law who had got lost looking for the reception, so I went and escorted him and his wife into the building). 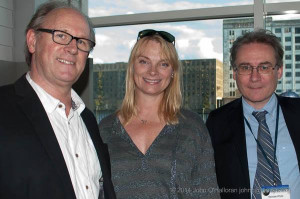 Janet Fielding is especially on form here, Tegan having been given a good bit of back-story and some excellent lines; but everyone is good, including particularly guest star Richard James as Rembrandt (hadn't heard of him before; IMDB says he has had supporting roles in various kids' prgrammes which I have not seen). Jonathan Morris when on form is excellent, and he's on form here; it may also be worth noting that this is the first Big Finish audio directed by Jamie Anderson, the son of Gerry Anderson of Thunderbirds.

Anyway, well worth a second listen. 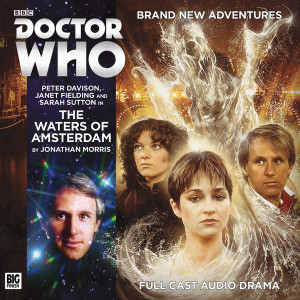