Jane called us up about three in the morning, to tell us of a great fire they saw in the City...

So I made myself ready presently, and walked to the Tower, and there got up upon one of the high places, Sir J. Robinson's little son going up with me; and there I did see the houses at that end of the bridge all on fire, and an infinite great fire on this and the other side the end of the bridge; which, among other people, did trouble me for poor little Michell and our Sarah on the bridge....

Everybody endeavouring to remove their goods, and flinging into the river or bringing them into lighters that layoff; poor people staying in their houses as long as till the very fire touched them, and then running into boats, or clambering from one pair of stairs by the water-side to another....

...to White Hall, and there up to the Kings closett in the Chappell, where people come about me, and did give them an account dismayed them all, and word was carried in to the King. So I was called for, and did tell the King and Duke of Yorke what I saw, and that unless his Majesty did command houses to be pulled down nothing could stop the fire. They seemed much troubled, and the King commanded me to go to my Lord Mayor from him, and command him to spare no houses, but to pull down before the fire every way.

...At last met my Lord Mayor in Canningstreet, like a man spent, with a handkercher about his neck. To the King's message he cried, like a fainting woman, "Lord! what can I do? I am spent: people will not obey me. I have been pulling down houses; but the fire overtakes us faster than we can do it."

...However, we had an extraordinary good dinner, and as merry, as at this time we could be....

So near the fire as we could for smoke; and all over the Thames, with one's face in the wind, you were almost burned with a shower of firedrops....

We staid till, it being darkish, we saw the fire as only one entire arch of fire from this to the other side the bridge, and in a bow up the hill for an arch of above a mile long: it made me weep to see it. The churches, houses, and all on fire and flaming at once; and a horrid noise the flames made, and the cracking of houses at their ruins....

...And got my bags of gold into my office, ready to carry away... 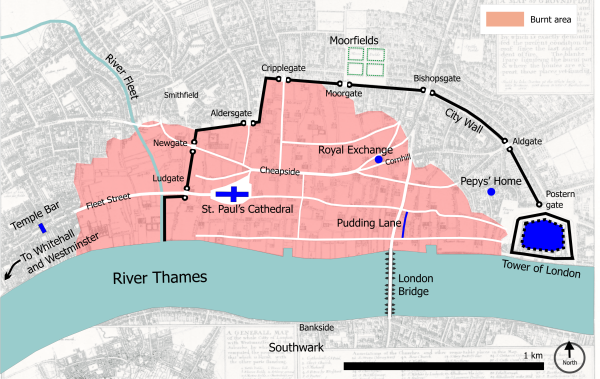 iFailure: Apple crashes in Brussels
How not to influence the EU. (Start by just not showing up.)
(tags: eu )

Old Queen of Navarre [who has just unwittingly accepted a gift of poisoned gloves]:
Thanks, my good friend.
Hold, take thou this reward.
Gives a purse

And so we are set up for the first of many many horrible deaths. (Have you noticed that the title character of every Marlowe play except this one dies horribly - I refuse to believe that Tamburlaine's death, though of natural causes, is easy - and this one, the exception is actually named after a massacre?) Unfortunately there's not really much else to say about it. The surviving text seems likely to be a reconstruction by actors or playgoers rather than Marlowe's own script, one page of which has apparently survived elsewhere. There is a sequence of bloody deaths, and hints that Henry III is rather close to his minions (which to me feels off-key and not explicit enough), and we end with Henry III murdered, giving way to the Protestant Henry IV.

It's all a bit breathless, perhaps because the events in question were so recent - the massacre which dominates the early scenes took place in 1572, Henry III was killed in 1589 and the play is thought to have been performed in 1593, when several of the characters portrayed on stage were still alive and well. Henry IV of course converted to Catholicism in July 1593, blunting the historical point, but by then Marlowe had been dead for two months so I think he can be forgiven for not writing that into the plot.

For what it's worth, I think The Massacre at Paris does locate Marlowe's religious views as not terribly exceptional for his time. The Catholics are baddies (with some ambiguity about Henry III) and the Protestants good guys. This is not the "plague on all their houses" approach of Tamburlaine or The Jew of Malta. The most effective scene for me is the one in which Ramus and two Huguenot colleagues are killed by the rampaging Catholics.

No Doctor Who fan can look at this play without comparing it to the 1966 First Doctor story, The Massacre of St Bartholomew's Eve. However the differences are so comprehensive that there is almost nothing useful to say. In Marlowe the massacre itself is at the start of the story; in Doctor Who at the end. Apart from the King, the Queen and the Admiral, there are no characters in common between the two - notably, the Abbot of Amboise, who is crucial to the Doctor Who story, does not appear in Marlowe (due to being completely fictional). There may be some resonance between the scholars Preslin in Doctor Who and Ramus in Marlowe, but even there the differences are more numerous: Preslin survives, Ramus is killed; Preslin is alone, Ramus has colleagues. I don't think that either John Lucarotti or Donald Tosh can have been very aware of the Marlowe play, which doesn't seem to have been revived until 1981.

In summary then, after reading the entire surviving set of Marlowe plays: I regret that it took me so long to get around to reading them. I find Marlowe's style generally crystal clear and very energetic without being too florid. You know exactly what is going on, and why the characters are doing what they are doing. In particular, he's powerful at the ol' blank verse, and he loves spectacular stage effects. I would jump at the chance to see The Jew of Malta or Edward II on stage.

But in fact the ambiguity in some Shakespeare plays is what makes them more interesting. The Henry VI trilogy and a few others are inferior to most of Marlowe, but the majority of Shakespeare's works have moved on to be more complex and provocative - this becomes particularly relevant when you compare The Jew of Malta with A Merchant of Venice. And Shakespeare does more interesting stuff with his stagecraft - Marlowe characters strut around declaiming grand speeches, and then there may be a big bang and certainly someone will get killed; but there's a lot more going on with Shakespeare.

The two are clearly in dialogue with each other. I picked up a few references on my own, and I admire (and am convinced by) those who have tracked down many more tips of the hat to Marlowe in Shakespeare. And having read the Marlowe plays, I think I now have a better understanding of Shakespeare's intellectual setting and what he was trying to do - building a new vision of theatre which of course draws from many sources, but Marlowe being one of the strongest of them. However, I very much enjoyed reading Marlowe in his own right. He was only 29 when he died (as violently as one of his characters); what might he have achieved if he had lived longer?

Marlowe's Complete Plays was the top book on my shelves acquired in 2013. Next on that list is Henri Troyat's biography of Tolstoy.