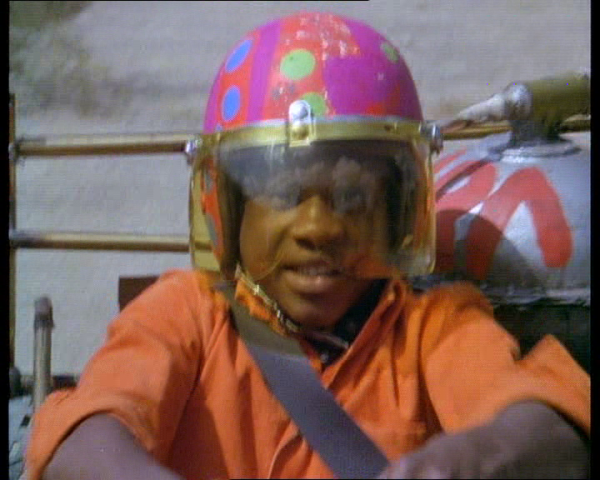 We start with Spring in a go-kart which veers off track and onto the open road, causing chaos. He is charged with various driving offences, and in the course of the magistrate's court hearing we flash back to the story of how the gang built themselves a go-kart, with special fuel injection system invented by Brains, which was sabotaged by nasty biker Nigel Parks causing Spring's problems. The magistrate clears Spring, and has a go on the track himself after Scooper wins the race, while nasty Nigel is arrested due to an incriminating spanner left at the scene of his crime. 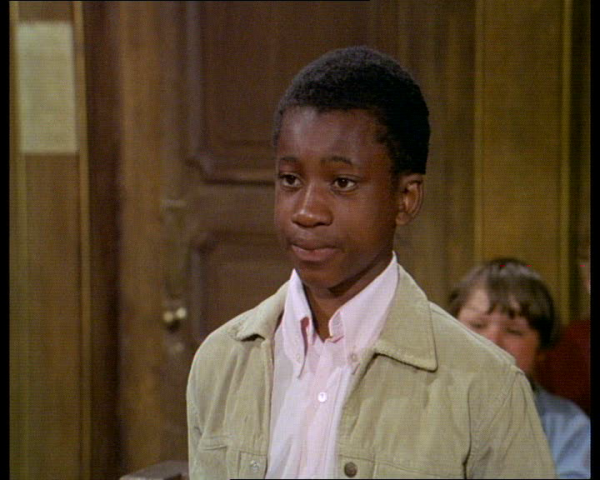 This is, again, one of the best episodes. The core of it is the two chase sequences (plot-wise the same chase sequence at different times in the narrative), which could have looked awfully dull but are shot in several different ways using different camera techniques to build up to excitement. The court scene which is the framing narrative is neatly executed as well (unlike, say, Trial of a Time Lord). It's not surprising to note that the director of this episode was probably the most senior director to work on the show.

Spring (Brinsley Forde), who tends to be just one of the others, does a nice job of being the centre of the narrative, and we hear more from Sticks and Tiger than usual as well. The narrative structure is quite different from the other episodes, giving the sense that this is something a bit different.

Actually there's very little to criticise here. The fact that the black kid is the one who gets arrested can be seen as subtle social commentary on the racism of the system; perhaps the fact that he gets let off is a bit unrealistic (though we should not be too obsessed by realism; last week, a fifteen-year-old designed a programmable dancing robot). Perhaps Albert forgives the kids for stealing his cart's wheels a little too quickly just because they look pleadingly at him. But I think this episode stands the test of time more than most. 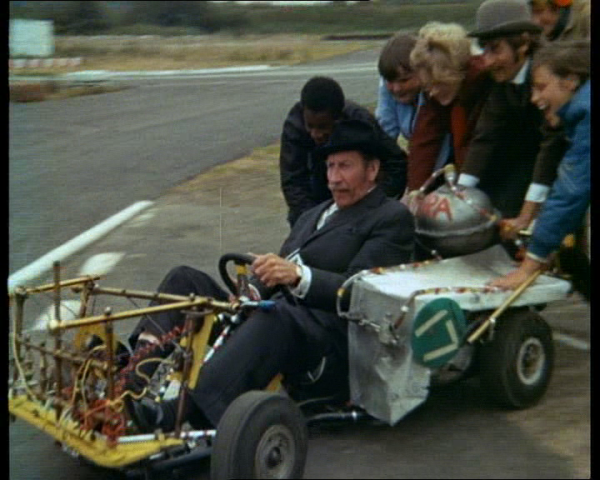 Karting was a very new phenomenon in 1970. History records that it was invented in the USA in 1956, and the Rye House Kart Circuit in Hoddesdon, where the karting scenes were filmed, was one of the first tracks in the UK. I'm glad to say that it is still going.

The plot of this episode is, errm, strongly reminiscent of Go, Kart, Go! a 1964 Children's Film Foundation production starring the 16-year-old Dennis Waterman alongside a future Doctor Who companion, Fraser Hines. It too was filmed at Rye House.

I have to admit that I went karting for the first time in my life last July, at the tender age of 48, with my son F (then aged 15) and various work colleagues, and we had a heck of a lot of fun. 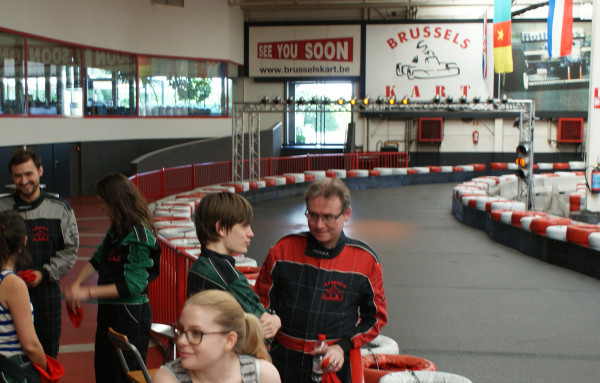 As noted above, the karting scenes were filmed in Hoddesdon, thirty km from the studios; the street scenes, however, were much closer to home, in Aldenham and Borehamwood.

Brinsley Forde (Spring) was very visible as a child actor in the early 1970s, one of the survivors of Double Deckers predecessor The Magnificent Six and ½ and starring as the central character of 1980 film Babylon. Howeverm he is best known as the founder and lead singer of reggae band Aswad, from 1975 until he left the group in 1996. Their top hit was "Don't Turn Around", which reached no. 1 in the UK charts in 1988; their top hit actually written by Aswad was "Shine", which reached no.5 in 1994.

It's difficult to overstate the impact that Aswad had on the importance of reggae in the UK. Peaking at the same time as punk, in the late 1970s, Aswad were a major factor in boosting the sound as a London phenomenon that was not only happening in the Caribbean, and in making it one of the currents of the rich mainstream of British music. Could Forde have had that level of impact without cutting his showbiz teeth on Double Deckers and the like?

Charles Crichton is by far the most prominent director to have worked on Double Deckers. Born in 1910, he began nhis career working as an editor on such films as Things to Come (1936), Elephant Boy (1937) and The Thief of Bagdad (1940); he then moved into directing, and took the helm for (among many others) The Lavender Hill Mob (1951) and The Titfield Thunderbolt (1953). But he stopped directing films from 1965, and did bits and pieces of television for most of the rest of his career (including 14 episodes of Space: 1999), returning to the big screen at the age of almost 80 for one last hurrah in 1988 with A Fish Called Wanda. He died in 1999. 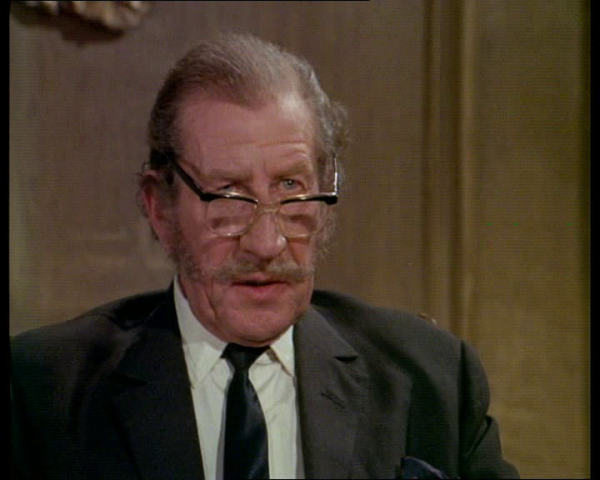 David Hutcheson (the Magistrate) was born in 1905 and had his only lead film role in 1934 with Romance in Rhythm. He had minor parts in many other films, including The Abominable Dr. Phibes (1971) and The Evil of Frankenstein (1964). He died in 1976. I love the way he uses his spectacles for effect in this episode. 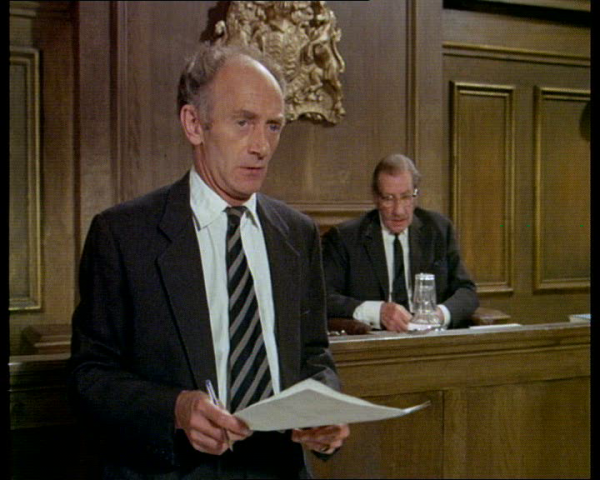 Jimmy Gardner (the Court Clerk), born in 1924, was another one of those actors who appears in the background of everything. I think the only other role I can remember him in is Ernie the bus driver in Harry Potter and the Prisoner of Azkaban (2004). He died in 2010. Robin Askwith (Nigel Parks), born in 1951, had already starred in the title role of the 1969 American TV movie Hans Brinker, or the Silver Skates. After Double Deckers his next big break was a minor part in Carry On Girls (1973), which perhaps led to him getting the title role in the series of sex comedies Confessions of a Window Cleaner (1974), Confessions of a Pop Performer (1975), Confessions of a Driving Instructor (1976) and Confessions of a Summer Camp Counsellor aka Confessions from a Holiday Camp (1977). That was the peak of his career; he still appears in soaps from time to time (including 12 episodes of Coronation Street in 2013-14).

Last week's audios
Shield of the Jötunn, by Ian Edgington

Next books
Bitter Seeds by Ian Tregillis
A Princess of Roumania by Paul Park
Another Girl, Another Planet by Martin Day

Books acquired in last week
Barsk: The Elephants' Graveyard, by Lawrence M. Schoen
The Long Way to a Small, Angry Planet, by Becky Chambers
The Life and Scandalous Times of John Nathan-Turner, by Richard Marson
Script Doctor: the Inside Story of Doctor Who 1986-1989, by Andrew Cartmel
The Commissioner, by Stanley Johnson
Zink, by David Van Reybrouck
Collapse