The European Commissioner's didgeridoo
One for the vaults.
(tags: eu )
On The Closure Of Public Achievement
How a non-profit met its end.
(tags: northernireland work )
The Real Danger of Brexit
The @Economist considers the bigger picture.
(tags: eu ukpolitics )
What’s in a name?: Macedonia’s problems go much deeper
A bad situation, not improving.
(tags: macedonia )

Episode 8: Scooper Strikes Out
First shown: 31 October 1970 (US), 5 March 1971 (UK)
Director: Harry Booth
Writer: Glyn Jones
Appearing apart from the Double Deckers:
Melvyn Hayes as Albert the Street Cleaner, the Cook, the Dormouse and the Cheshire Cat
Jane Seymour as Alice
Bunny May as the White Rabbit
Tim Barrett as the Mad Hatter
George Benson as the Caterpillar
Ruth Kettlewell as the The Duchess
Joan Sterndale-Bennett as the Queen of Diamonds
John Barrard as the King of Diamonds

Scooper is knocked unconscious learning to play baseball, and finds that the gang's den has been transformed into Wonderland, with Alice played by up-and-coming actress Jane Seymour. 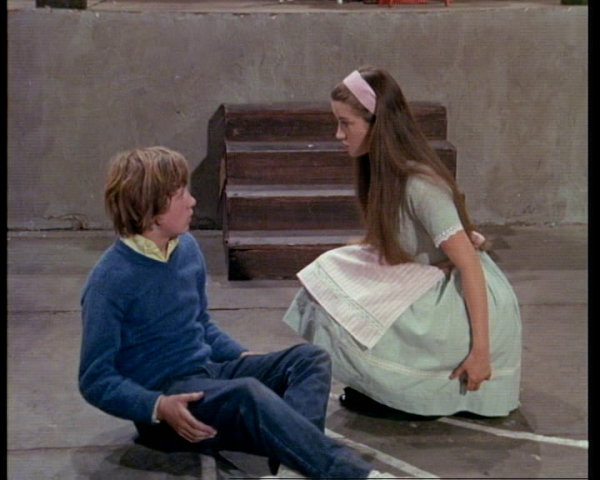 "Welcome to the Party", by Ivor Slaney and Glyn Jones, sung by Tim Barrett (Mad Hatter), Bunnie May (White Rabbit, replacing the March Hare from the book), Melvyn Hayes (the Dormouse) and Jane Seymour (Alice), which is used by Jones to fill in narrative for those viewers unfamiliar with his source material. Jones had many skills but I don't think he was a great lyricist.

Glyn Jones had aspirations to great writing which were not always fulfilled, but here he's taken a single idea and just run with it to the limits of the time allocated, and he fills that time well, paying homage to his source material and working up a somewhat surreal story around it. Jane Seymour, only 19, overshadows the rest of the guest cast. Peter Firth and Melvyn Hayes are effectively backing her up here. It's interesting because actually the script makes it Scooper's story - but that's not how it comes across on screen.

After last week's rather conservative episode, here we have a critique of the justice system, with the crazed Queen of Diamonds issuing arbitrary death sentences. We'll get more on the justice system in a couple of episodes.

Ow, the baseball scene at the start... look at them quaint English kids trying to learn real sports!

As noted above, the song is not brilliant.

Well, it's pretty obvious what this is drawing from. Lewis Carroll's classic Alice in Wonderland (1865) is the source for Alice, the White Rabbit, the tea party, the trial scene, the croquet and the jam tarts. But Alice is also a key text for the Swinging Sixties, with its themes of altered consciousness induced by ingesting strange substances, and I bet the elder brothers and sisters were giggling a bit as they watched this episode with their younger siblings, before sneaking off to listen to Jefferson Airplane's "White Rabbit".

Having said that, Alice has long been a favourite of screen and stage (the first theatrical adaptation known to Wikipedia dates from 1886). Three adaptations that must have been in Jones' mind as he wrote this episode are the 1951 Disney movie; the 1965 television version adapted by Dennis Potter with future Doctor Who star Deborah Watling in the title role; and the 1966 Jonathan Miller adaptation with a cast of a thousand stars. The tea-party scene in Double Deckers is particularly reminiscent of the Dennis Potter equivalent. 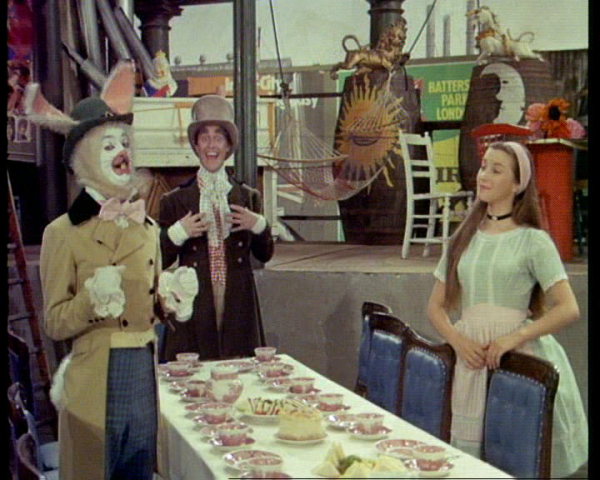 Jane Seymour (Alice) must be the highest profile performer to have appeared on Here Come The Double Deckers. She was 19 when this was filmed; as far as I can tell it was her first TV role. Born in 1951, her first screen appearance was as an extra in Oh, What A Lovely War (1969) but she hit the big time as Bond girl Solitaire in Live and Let Die (1973) and never looked back. These days she is best remembered for the title role in Doctor Quinn, Medicine Woman which ran from 1993-98 (twenty years ago! Incredible!) and is still working, most recently as the title character's mother in erotic spoof Fifty Shades of Black, coming soon to a cinema near you. 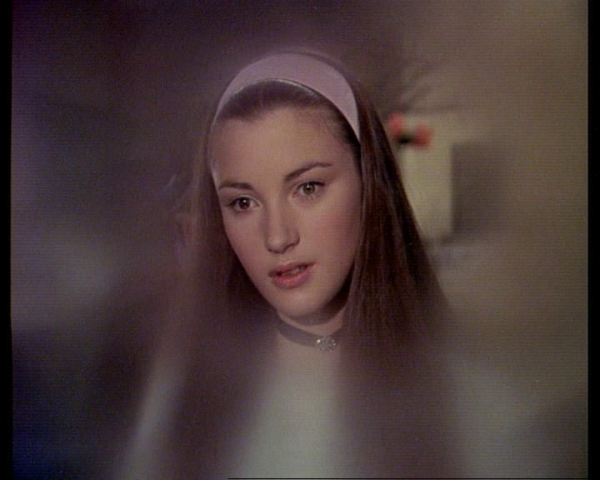 Having said that, Peter Firth (Scooper) went on to have the most successful acting career of the seven main characters. He almost didn't get the part; Glyn Jones recalls in his memoirs:

Peter Firth who hailed from Pudsey in Yorkshire and had the strongest Yorkshire accent played the leader of the gang. He was my choice from the beginning. The Americans were dubious over the accent saying no one in the states would understand a word he said but we pointed out that that was what dialogue coaches are for. Peter, I could see, was getting more and more disgruntled with the whole process and I was silently willing him to just hang in there, the part was almost his, as it eventually was.

Firth went on to make his name on stage in Peter Schaffer's Equus in the mid-1970s, and also briefly overlapped with Jane Seymour on stage as Mozart and Constanze in Schaffer's Amadeus. He was Dominick Hide in the two BBC plays of 1980 and 1982 about a time-traveller from a more mellow future, and in The Hunt For Red October (1990) he plays political officer Putin (yes, Putin!) who is killed off by Sean Connery in an early scene. He appeared as Sir Harry Pearce in all 86 episodes of the BBC spy series Spooks aka MI-5 from 2002 to 2011.

Apart from Jane Seymour, the other guest stars are not particularly remarkable.
The two pages sitting at the feet of the Queen of Hearts are rather cute, but uncredited. ...for Robbie the Robot; a real treat.
Collapse