The World Isn’t Less Free Than It Used To Be
@fivethirtyeight summarises @FreedomHouseDC.
(tags: politics democracy )
We Are Hopelessly Hooked
Why we can't stop being online.
(tags: internet psychology )
The Onion on Jeb Bush
Cruel but hilarious.
(tags: uspolitics )
Independent and Independent on Sunday print closures confirmed
Not very surprising.
(tags: ukpolitics media )
Why I Just Dropped The Harassment Charges [against] The Man Who Started GamerGate
A tough read.
(tags: sexandgenderandsexuality games )

Double Deckers - To the countryside

Albert and the gang go camping, much to the annoyance of a couple camping in the next field, but entirely with the approval of the local farmer. Japes ensue when their donkey misbehaves, and then it rains overnight.

I've put the French version of the opening song up top; "Into the Countryside" is by regular series song-writers Ivor Slaney and Michael Begg, and features some cinematography reminiscent of Procul Harum's "Whiter Shade of Pale" (which is from 1967 so it cannot be a coincidence). Do have a watch.

"Granny's Rocking Chair" is a beautiful sweet little song, where for the first time we see the Double Deckers as Billie and her backing singers (minus the sleeping Tiger):

"Granny's Rocking Chair" is credited to a Mair Somerton-Davies, of whom little else is known except that she is also credited for a 1966 single by a band called Situation. At least, little was known of her until I contacted her daughter, who told me:

Mum was an amazing lady - she had a group called the Tip Toppers we were based in Watford and used to raise money for mentally handicapped... also we regularly used to put on performances for the elderly and had concerts at Watford Town Hall. Mum had two bands one called Tiles Big Band the other called Manego - these were in addition to the Tip Toppers and also she was a Drama Teacher Song Writer, Teacher and also helped people with speech impediments.

"Granny's rocking chair" actually started off as "Granny's Rocking horse" but then as she put it to music it became "Granny's Rocking Chair". The original theme song for the double Deckers was actually written by Mum but in those days they changed a small part of it and she was never paid royalties on it. The song was called "Get On Board" and the original line was "get on board all you people" and they changed it to "get on board with the double deckers" therefore rewriting some of the melody... originally an album was to have been released called The Kids Next Door... it was a shame she was never fully recognised for her amazing talents.

(And while we're on music, note the nod to Dukas' Sorcerer's Apprentice for an early scene with the donkey.)

This is a real delight of an episode, with two excellent songs and some excellent comedy moments. The potential villain, Farmer Giles, turns out to be a good guy; and the actual villains, the snooty camping couple, are redeemed by ἀγάπη after ὕβρις and νέμεσις.

There's a slightly nasty element of class sneering at Millie and Gerald, who are clearly not as respectable as they think they are. (And they sleep in separate beds; and she's unaware of his military record. Interesting.)

This is so totally derivative of the 1969 film Carry On Camping that it actually has one of the film's main performers, Betty Marsden, in a very similar role. (Though there is no equivalent here of the memorable Barbara Windsor shower scene; this is a kids' show, after all.)

The bridge is the one at Tyke's Water Lake in the grounds of Haberdasher's Aske's School for Boys, three miles from the studios where most of Here Come the Double Deckers was made. The bridge also featured the previous year in the opening titles of several of the Tara King episodes of The Avengers, and was soon used again for the pre-title sequence of Dracula A.D. 1972 starring Christopher Lee and Peter Cushing. The pupils at the school at this time would have included Britain's current minister for Europe, David Lidington, and also my mate Andrew who works for the European Commission.

The other locations are nearby.

This episode has an particularly high-powered guest cast for its time.

Betty Marsden (Millie) was born in 1919, and was particularly well-known for her regular roles in the 1960s radio comedy shows of Kenneth Horne, Beyond Our Ken and Round the Horne. She also appeared in two Carry On films, Carry On Camping, as noted above, and a small part in the 1961 Carry On Regardless. She also plays the tipsy slave auctioneer Verlis in Assassin, a particularly camp episode of Blake's 7. She died in 1998.

Hugh Paddick (Gerald), born in 1915, was also a veteran of Beyond Our Ken and Round the Horne, where he played Kenneth Williams' sidekick and together they made an unsuspecting public aware of Polari. Other than that, he tended to be a straight man to the likes of Tommy Cooper, Jimmy Tarbuck and Morecambe and Wise, though he got two now-forgotten sitcoms of his own, Rentaghost fore-runner Pardon My Genie (he was the Genie) and Can We Get On Now, Please? in which he played the quietly brilliant clerk of the court. He died in 2000.

George Woodbridge (Farmer Giles), born in 1907, was typecast as playing yokels, inn-keepers and farmers in horror films. But at this stage he was moving into more friendly territory, and he really hit the big time as Inigo Pipkin, the kindly old puppeteer in the ITV children's show of the same name, first broadcast in 1973. Unfortunately he died that year, only a few weeks into the filming of the second series. Pipkins, as the show was renamed, actually worked his death into the plot, brave territory for a children's programme. The show ran until 1981.

Glyn Jones (co-writer and script editor) has been mentioned here a few times. I posted about his life here and the extracts from his autobiography relating to Double Deckers here.

Long, long ago, in 1991, I was researching the medieval textbook Liber de arte astronomice iudicandi by the late twelfth-century English astrologer Roger of Hereford, which survives only in a dozen or so manuscripts. Various indications led me to try and compare his text with the earlier twelfth-century translation by Hermann of Carinthia of the ninth-century Introduction to Astrology by the ninth-century scholar Abu Ma'shar, written when Baghdad was the centre of learning of the medieval world. Fortunately, the University Library in Cambridge had two copies of the Hermann translation. It has been out of print for some time; the earlier one dated from 1488 and the later one from 1506.

As I did my research - in the course of which I found that Roger of Hereford had cribbed pretty substantially from Hermann's text (and also cast a horoscope for Eleanor of Aquitaine, using a birthdate of 14 December 1123) - I chose to work from the 1506 edition rather than the 1488 edition of Hermann's book. This wasn't a choice based on which was more legible or accessible; it was purely because the 1506 book had the name of a previous owner firmly inscribed on the flyleaf, and a number of his scribbles and notes in the margins. It was, quite simply, a thrill to work with a book that had been owned and loved by the great Elizabethan wizard John Dee, the man who probably inspired Prospero in The Tempest and a key figure in the murky relationship between early modern science and magic.

That was more than half my lifetime ago. But when I saw that the Royal College of Physicians was hosting an exhibition of books stolen from Dee's library during his lifetime, I knew that I had to go and relive the summer of 1991. And I was right. The books are wonderful artefacts in themselves, but Dee's marginal doodlings make them even more fascinating. I was fortunate to have the company of

bohemiancoast as I explored the exhibition on Tuesday morning. Before going to my own photographs, which unfortunately are not particularly good, I commend you to those in this Culture24 article and these by Jason Atomic. 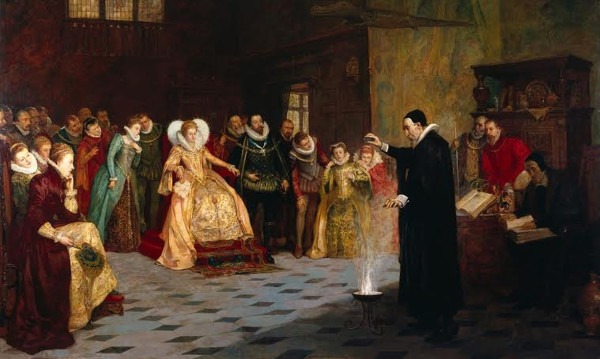 This is a nineteenth-century picture of Dee at Queen Elizabeth's court. A ring of skulls around him was painted out by the artist.

The picture hangs beside a display cabinet including several objects on loan from the British Museum and the Science Museum. These include: Yes, that is the magical mirror through which Dee and his assistant Kelly held conversations with angelic beings. It is in fact polished obsidian glass from Mexico. The case has a note by its subsequent owner Horace Walpole, author of The Castle of Otranto, quoting these lines from Samuel Butler's epic poem Hudibras:

KELLY did all his feats upon
The Devil's looking-glass, a stone

And yes, that's Dee's own crystal ball in the right of the picture. A golden magical disc is out of shot.

On the shelf below is a smaller mirror, and also this item: This crystal, according to Dee, was given to him by the angel Uriel in 1582.

I hope that the Royal College of Physicians has installed adequate thaumic safeguards on that display case. Those are some pretty impressive magical items.


And here is none other than Jeanette Winterson, at the opening ceremony, explaining why Dee mattered:


A couple of warnings. The first two display cases, giving the historical context for the whole story, are right at the well-lit entrance to the first floor display and are covered with protective cloth, whereas the rest are uncovered because they are in the relative dimness of the walls - we missed the first cases and had to go back and look at them. There are two last display cases isolated on the second floor, along with dissected human veins and arteries. It also must be said that the RCP building is a truly horrible example of 1960s architecture. 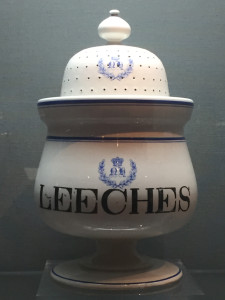 Do go and see it.

When I visited the John Dee exhibition last week, I managed to get a decent picture of the horoscope that he had drawn in the margin of his copy of Ptolemy's Tetrabiblos: 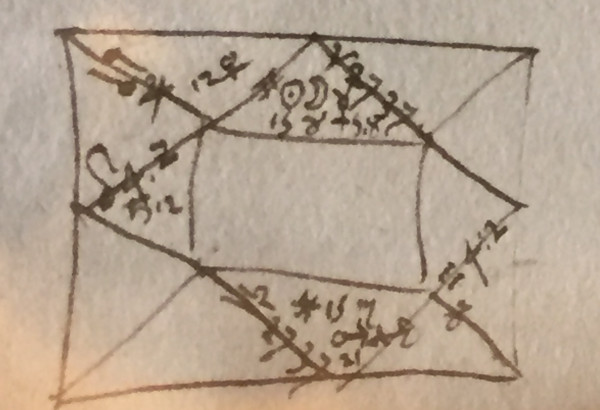 It's a nice clear example of the astrological text. Starting at the left, and going clockwise (therefore backwards through the zodiac), I interpret it thus:
That gives us the following set of planetary positions:

Well, that was a pleasant way to spend a rainy Saturday afternoon!
Collapse