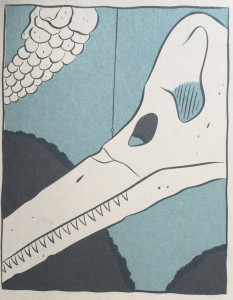 A classic graphic novel from the early 1990s, claiming to be autobiographical, about a Toronto comics artist who becomes fascinated with a Canadian cartoonist of the 1950s and 1960s, and goes on a voyage of discovery about both his predecessor and himself. I'm trying to identify who recommended this to me, or whether I just picked it up because I liked the title; I really enjoyed it, though I hope that the writer is a nicer person in real life than he comes across as being here.

The words were still ringing in the old man's ears when he walked down the steps to leave and stood still, blinded by the fierce autumn sun. As his pupils slowly shrank, he held on tight to the handrail and breathed in, slow and deep. He listened to the cacophony of cars, trams, the beeping sounds telling pedestrians they could cross. And voices-the excited, happy voices which hastened by to the accompaniment of the clatter of shoes. And music. Had he ever heard so much music? Nothing managed to drown the sound of the words though: You're going to die, old chap.

mcbadger and (with reservations)

inulro recommended this after I really enjoyed The Snowman, and The Redbreast also features Norwegian detective Harry Hole dealing with a very complex murder plot which in this case has political implications going right to the top of the Norwegian government and reaching back to the grim reality of Norway's relationship with Nazi Germany during the second world war. It's grittily described and the eventual solution makes sense, with an unresolved plot thread which apparently leads to two more books in the Harry Hole sequence. I was not completely convinced by the use of multiple personality disorder as a major plot point though; it seems to me a bit of a magical cop-out for a mystery writer, and I suspect even though everyone in literature with MPD is a murderer, this may not be true of everyone with MPD in reality! Still, I enjoyed it.

Just back from a business trip, and was interested to note that neither of the two Cyrillic-alphabet languages used for the safety instructions was Russian: