And the first science fiction book with a partly Irish setting was... 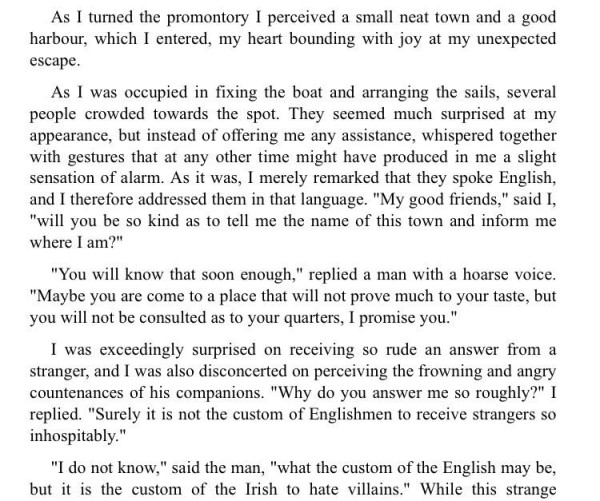 I am one of those people who, until this year, let the Hugo nominations guide my reading of short SF rather than the other way round. Clearly that was one of the factors that allowed the recent unpleasantness to develop, so I'm going to make a serious effort to remedy that and read more (ie any) sf short stories published this year before the deadline, which will presumably be in the early spring of 2016.

The problem is, where to start? There is so much of it.

Well, with the guidance of the Wikipedia (yes, I know) articles on the short fiction categories, and my own notes, I've compiled a list of the places of publication of the short fiction I actually voted for in the last five un-puppied years.

2014
Short Story: The Water That Falls on You from Nowhere, by John Chu (Tor.com) - I voted for the winner
Novelette: The Truth of Fact, the Truth of Feeling, by Ted Chiang (Subterranean Press)
winner was The Lady Astronaut of Mars, by Mary Robinette Kowal (Tor.com)
Novella: Six-Gun Snow White, by Catherynne M. Valente (Tor.com)
winner was Equoid, by Charles Stross (Tor.com)

This really does help me to drill down. In the last five puppy-free years, I voted for three stories published by each of Asimov's Science Fiction, Clarkesworld, Subterranean Press and Tor.com (and both Asimov's and Tor published two winners which I did not myself vote for). If they've published stuff that I liked in the past, it's likely that they will do so in the future. So I'm inclined to make my contribution to the 2016 nominations by reading the short fiction published in those venues this year, along with anything else that should catch my eye in the meantime (such as Penric's Demon, which at present is the only item on my nomination lists for short fiction). I'll also add Strange Horizons, which I always enjoy. Any other recommendations are also welcome.

This is yet more evidence of the Australian surge in feminist sf commentary (which, let's be very clear, is a Good Thing) spearheaded by the Galactic Suburbia team, two of whom have assembled this volume of (mostly) letters in tribute to James Tiptree jr / Alice Sheldon who was born 100 years ago this month. The first half has literally dozens of letters written to Tiptree / Sheldon by today's writers, reflecting on what she means for them. They are mostly very short, but long enough to make an impression: I now want to get hold of more work by Theodora Goss and Bogi Takács. We then get the actual correspondence between Ursula Le Guin and Alice Sheldon after she was unmasked as female by Jeffrey D. Smith (who was to become her devoted literary executor). I found this exchange of letters tremendously engaging and moving. More correspondence follows to and (mostly) from Joanna Russ, and the collection closes with previously published material by Helen Merrick and Justine Larbalastier, and a new essay from Michael Swanwick, about the importance of Tiptree's writing.

When I read books about sf, I want i) a better understanding of stuff I have already read and ii) suggestions of stuff I might read in the future which may appeal to me. I got both from this book, and I imagine that I will be adding it to my nomination lists for both the Best Related Work Hugo and the BSFA Award for Best Non-Fiction in 2016.

Sorry to say that I was a bit disappointed by this volume, the first of a new presentation of Elric in internal chronological order. About half of the book is the script of an Elric-before-he-was-King graphic novel, which is OK but I'd have preferred to get the real thing. There are some interesting essays and short pieces front and back, but I think it's really one for the Elric or Moorcock completist, and I am not one.
Collapse